Grin and Bear It

This is one of 1122 articles in my book Now and Then Again, The Way We Were and the Way We Are, second edition. The book is available from Amazon for $20.95 print and $9.95 Kindle and  also as an ebook from Apple, Kobo, and Scribd for $9.95. It’s fixed format so it’s better with a tablet, laptop, or computer. There are more articles from the book on another blog here. And there is a book preview website .

Grin and Bear It

“On Whit-Tuesday, 1786, there was celebrated at Hendon, Middlesex, a burlesque imitation of the Olympic games. One prize was a gold-laced hat, to be grinned for by six candidates, who were placed on a platform, with horse collars to exhibit through. Over their heads was printed:

Detur Tetriori;
or
The ugliest grinner
Shall be the winner

Each party grinned separately for three minutes, and then all united in one grand exhibition of facial contortion. An objection was lodged against the winner on the ground that he had rinsed his mouth with vinegar.”
— All the Year Round, Charles Dicken’s weekly, 1888.

Grinning matches, making grotesque faces for a prize standing on a table with your head through a horse collar, had been going on for more than a hundred years before this account.

A mocking essay by Joseph Addison in his paper The Spectator September 18, 1711 notes an advertisement in The Post-Boy for an event on October 9 featuring a horse race for a prize of a plate worth 6 guineas, a lesser value plate for a race of asses, and “’a gold ring to be grinn’d for by men’”

Addison says the contests “in which the asses and the men are concerned, seem to me altogether extraordinary and un-accountable.” He “would advise a Dutch painter to be present at this great controversy of faces, in order to make a collection of the most remarkable grins that shall be there exhibited.”

Addison then gives the account of a gentleman who, seeing the same ad, entertained a coffee house with the story of a grinning match he had witnessed. He references celebrations on the taking of Namur (in modern Belgium during the Nine Years’ War), which would place the event in 1695. The prize was a gold ring.

A swarthy Frenchman happened by and “looking upon the company like Milton’s Death, grinned horribly a ghastly smile.” But, lest a foreigner take the prize, it was decided upon a second trial that “he was master only of the merry grin.”

The next contestant “excelled in the angry grin,” but the prize ring had been offered by a Whig (constitutional monarchist) Justice of the Peace and the contestant was said to be a Jacobite (favoring restoration of the absolute monarchy of Catholic James II) and when he refused to take an oath of loyalty to King William III was disqualified.

A ploughman nearly won the prize with “such a hideous grimace that every feature of it appeared under a different distortion” until it was revealed that he had practiced with verjuice (juice of sour fruit) and was discovered to have a crabapple on him during the contest and he was disqualified as a cheat.

The prize went to a cobbler, Giles Gorgon, whose first grin “cast every human feature out of his countenance, at the second he became the face of a spout; at the third a baboon; at the fourth the head of a bass-viol; and at the fifth a pair of nut-crackers.”

The “country wench” he had wooed for five years without success was “so charmed with his grins and the applauses which he received on all sides, that she married him the week following, and to this day wears the prize upon her finger, the cobbler having made use of it as his wedding ring.”

They still grin today, although it’s called gurning. At the Egremont Crab Fair in Cumbria on the northwest coast of England is held the World Gurning Championship, complete with horse collars. “Top Gurn” Tommy Mattinson won again for the 15th time in 2013.

The Fair has been held since 1267 and is named for the crab apples that the Lord of Egremont gave away. Today, sweet apples are thrown to the crowds lining the street in the Parade of the Apple Cart.

Tommy Mattinson gurned for the Queen, and she gurned back. 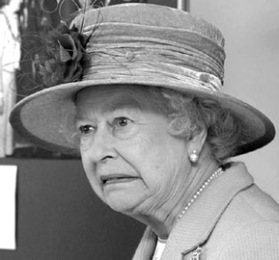 “A Grinning match took place in June near Bridlington, England, for a quantity of tobacco. There were three competitors for the prize, all of whom were speedily seized with the most painful symptoms, in consequence of their violent contortions and two of them died in a few days. The other survived only a few days longer, whose father on going to visit him, was so shocked with his appearance, that he took to his bed and never rose again.”
— The Sprig of Liberty (Gettysburg) August 24, 1804.

This bizarre incident was originally reported in the Times of London June 11, 1804 according to A Brief History of the Smile (2005) by Angus Trumble, which also quotes it.

Oddly there is an American band called The Grinning Match that plays “funky fresh” music.